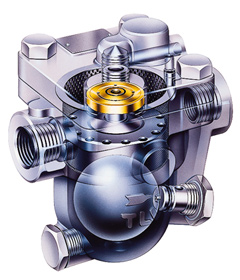 JX series steam traps can be installed on various types of equipment that uses steam as a heat source. The series covers a wide range of condensate loads, from the 100’s of kg/h to several 10’s of tons/h, making this TLV's most widely used series of steam traps.

In addition to offering compact size, continuous discharge of condensate, and large condensate discharge capacities, these steam traps are equipped with an X-element air-vent that provides a powerful automatic blow-out function. All these qualities gathered in one trap make the JX series ideal for steam-using equipment. 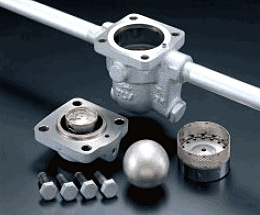 Necessary Features of Steam Traps for Process Use

When the X-element is cold, it opens the air vent valve a full 3.5 mm, rapidly discharging initial air 3.7 times more rapidly than the former integral bimetal air vent included in the J3N. Equipment start-up time is also shortened through the rapid discharge of hot air up to approx. 6°C below saturation temperature, something previously not possible.

The Free Float® adjusts the valve opening in response to the amount of condensate flow and continuously discharges condensate, preventing any accumulation of condensate inside the equipment. The X-element reacts with great sensitivity to hot air entrained during operation, and discharges it rapidly. These synergistic effects result in maximized heating efficiency.

The J3X is roughly the same size as the former J3N, yet it offers a larger discharge capacity than even the former J5N, which was one size larger. 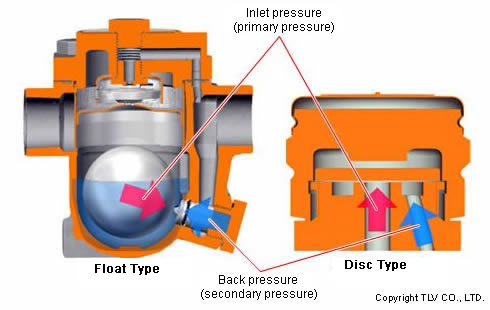 Constructed to resist erosion through features like: a simple construction with no levers or hinges and only one moving part, the Free Float®; an extra-large surface area in the condensate discharge passage; improved thickness of passage walls from 3 mm to 5 mm (model J3X); and a selection of highly-durable materials.

The video below demonstrates how TLV's Free Float® steam traps prevent steam leakage by creating a water seal over the orifice. The precisely grounded Free Float® valve modulates the flow of condensate, and shuts the orifice completely when there is no liquid in the trap.

For steam processes, particularly for batch operations or where condensate removal is difficult due to equipment configuration

Used in a Variety of Industries

High precision technology gives TLV's Free Float® traps superior reliability. They are thus confidently used in a wide variety of industries on the processes that are the lifeblood of manufacturing.