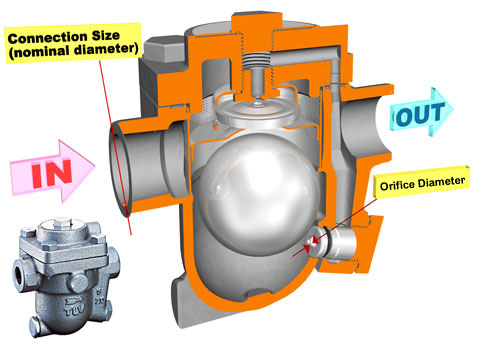 This is because although piping is generally sized for two-phase flow (condensate with steam vapor), the orifice only needs to be sized for the condensate volume. For example, with a pressure differential of 0.2 MPaG [30 psi] ], a 2-3mm [⅛ inch] orifice can discharge approximately 350 kg/h [770 lb/h] of condensate. This would be sufficiently large for condensate drainage based on the estimated steam consumption of small-scale equipment that has a 15mm [½ inch] diameter condensate outlet. Some traps have a slightly larger discharge capacity because condensate can also be discharged through their thermostatic air vent.