Innovia Films is a major producer of highly differentiated speciality Biaxially Oriented Polypropylene (BOPP) films for some of the world’s best-known brands across a wide variety of everyday consumer goods, including home and personal care products, food and beverage, confectionery, tobacco, luxury goods and industrial applications.

Following an initial site audit and steam trap survey, steam solutions specialist TLV Euro Engineering UK Ltd has supplied and installed a number of efficient solutions on an existing steam line at Innovia Films, with energy savings from the installation already reaching 10 MW per day and 80,000 GBP [100,000 USD] per year!

Innovia Films’ manufacturing facility supplies steam to its film bubbling and shearing machines, rollers, film coaters, and dryers on its 24-hour production line, and also uses it for space heating during colder seasons.

For many years, these processes had vented a percentage of flash steam (steam formed from hot condensate when the pressure is reduced) to atmosphere. Flash steam can be an eyesore, can create safety issues, and represents heat energy going to waste. So Innovia invited several steam specialists to propose solutions for recovering energy from the flash steam. 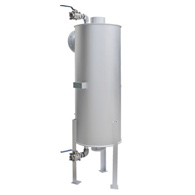 Flash steam used to heat condensate, then returned to the boiler

The solution proposed by TLV replaced the existing spray condenser with a pair of SR steam condensing heat exchangers to recover the flash steam energy and divert it back to the feedwater in the plant room.

Explaining the process, TLV Euro Engineering UK Ltd’s regional sales engineer John Lea says: “The new recovery system sends treated condensate and flash steam out to large SRs that we specified and installed. The SRs heat the condensate using the flash steam, condense the flash steam, and then return it along with the warmed condensate to the feedwater tank.”

This solution allowed Innovia to supply more pre-heated feedwater to the boiler, which subsequently reduced the energy required for heating new, cooler feedwater. By reusing flash steam, they were able to save approximately 3,000 kg [6,600 lbs] of steam per hour.

Looking at the data compiled to date, Innovia estimates a possible return on investment within two years and savings of approximately 80,000 GBP [100,000 USD] a year.

“We’re in the process of quantifying savings, but steam on site costs 26 GBP [34 USD] per 1,000 kg so the predicted saving of over three million kilograms [6.6 million pounds] of steam results in the anticipated 80,000 GBP [100,000 USD],” says Michael Edmondson, process engineer at Innovia Films.

The TLV solution was more cost effective, more efficient, and worked better for us

Unlike our existing attempt at a direct injection flash steam recovery system, the TLV system adopts shell-tube condensers, which separate the water from the steam to increase the surface area and condense the flash steam more efficiently.

The solution from TLV was more cost-effective than the others we received, and they were working with us to design a solution that worked for us and our processes, rather than something off-the-shelf. We were also impressed with the after-sales support TLV promised, which was something we weren’t confident of getting from the other suppliers that tendered.

Interested in recovering flash steam at your plant? We can help!