In a vented condensate recovery system, steam trap inlet pressure or a condensate pump is used to return condensate to an open-to-atmosphere collection tank for use as boiler make-up water, pre-heat or other hot water applications.

Besides pressure, one of the major differences between vented and pressurized systems is the temperature at which condensate can be recovered. In a vented system, because condensate is vented to atmospheric pressure, the maximum recovery temperature of condensate is some value less than 100°C [212°F] due to flashing at that temperature, and subsequent heat loss during from return piping and equipment.

Tip
Vented systems aren't limited to using trap inlet pressure. Pressure can also be equalized if backpressure is too great, in which case condensate drainage equipment such as a mechanical pump/trap assembly is balanced to the condensing equipment itself to constantly equalize with the modulation of the equipment’s pressure. When equalized with equipment, drainage will occur by gravity regardless of whether the equipment steam pressure is positive or in vacuum.

Selecting Between a Vented or Pressurized System

The selection between a vented or pressurized condensate recovery system should be based on a careful economic analysis relative to the gains and losses of each system, which includes the following factors:

For a discussion on the differences between using trap inlet pressure and a condensate pump for condensate return, please refer to: 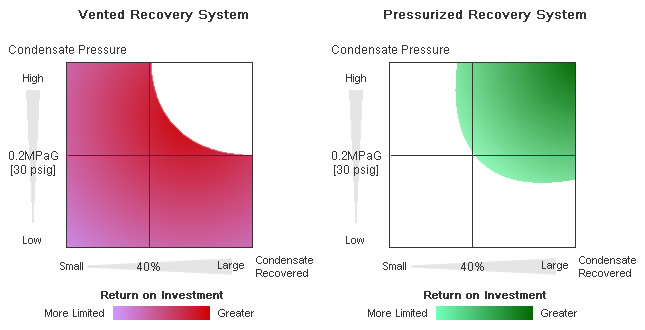 Since vented recovery systems are typically less costly to design and install, these will typically be used in instances where the return on investment is deemed too low to adopt a pressurized recovery system, for instance, in systems that use lower pressure steam.

Because their configuration is much simpler, vented recovery systems typically require a much lower initial investment than pressurized recovery systems. Sizing condensate transport lines is also much easier as piping can be sized like water piping once condensate and flash steam have been separated.

On the other hand, since the collection tank is open-to-atmosphere, a larger amount of energy is lost when condensate flashes to atmosphere – especially in installations where trap inlet pressure is high. The formation of vapor clouds can also have a negative impact on a plant’s work environment.

Condensate recovery systems that are vented to atmosphere often cost less to implement that a pressurized system, but not as much energy can be recovered.

Pressurized systems involve a much greater number of design considerations than vented systems. For instance, a specialized valve must be installed to regulate the release of flash steam to atmosphere and condensate transport piping must be sized for two-phase flow of steam and condensate.

However, these systems allow for a much greater percent of energy to be recovered compared to vented systems. Additionally, since flash steam is not vented to atmosphere, a greater amount of water can be recovered and reused. The absence of vapor clouds can also considerably improve a plant’s work environment.

Condensate recovery systems that are pressurized often cost more to implement that a system vented to atmosphere, but also greater energy savings.

*May be higher. Limited by max operating temperature of pump and peripheral equipment.