From its UK headquarters in Cheltenham, the company offers a wide range of steam engineering products supported by services such as consulting, site inspections and seminar training. 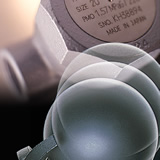