What is an Orifice No.?

The higher the trap orifice number, the smaller the diameter of the orifice. At first glance, this may seem counter-intuitive, but a closer look reveals the reasoning behind this system.

In TLV steam traps, the orifice number indicates the maximum differential pressure in kg/cm² (bar) at which the steam trap will discharge condensate. For example, a No. 10 orifice is rated for 10 kg/cm² (10 bar, 150 psi). The higher this number is, the higher the pressure at which the orifice can be used to drive condensate through it. However, in order to achieve higher operating pressure differentials, a smaller opening is required, which results in a lower discharge capacity for a given operating differential pressure.

Forces Acting to Close and Open the Valve 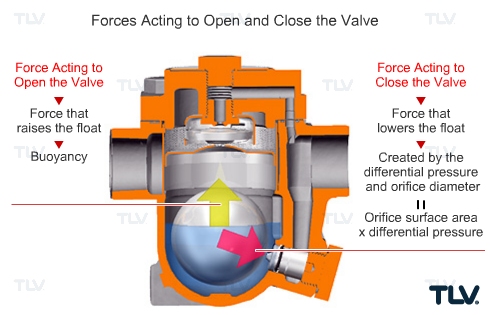 The mechanism that causes the Free Float® trap to operate is the force of buoyancy.

Buoyancy causes the float (which is also the valve itself) to rise, and after the float rises up off the valve seat, the valve is in the open position. In other words, the force of buoyancy is the force that acts to open the valve. If we assume that the specific weight of condensate is a constant, then the buoyancy of the float is determined by the volume of the submerged part of the float. The force of buoyancy is therefore at its highest value when the float is completely submerged, and given that the same float is being used, it is not possible to achieve a stronger force acting to open the valve than this.

In contrast, the force acting to close the valve is a force that is created by the diameter of the orifice and the difference between the pressures in front of and behind the orifice. An example of this that is familiar to many of us is when the water is draining out of a bathtub that uses a drain plug. If the plug gets too close to the drain as water is being drained out, the plug is sometimes sucked back into place on the drain, closing off the flow of water. A force identical to this is at play inside a Free Float® trap.

Fig. 1 If the orifice diameter is constant, then the larger the operating differential pressure, the stronger the force acting to close the valve.

Fig. 2 If the differential pressure is constant, then the larger the orifice diameter, the stronger the force acting to close the valve.