TLV has won a contract to provide regular steam-trap surveys of all 13 BOCM Pauls animal-feed processing sites throughout the UK, using its latest Trapman® testing equipment. 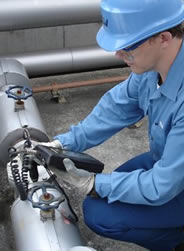 Testing steam traps with the TrapMan®

”The moisture in steam also acts as a lubricant while the meal is extruded through the pellet die, helping to reduce the energy needed to run the extruders,” he added.

Committee members realised that figures from the Carmarthen site could be replicated at the other 12 sites, so Reith’s suggestion that the company undertake a survey of all sites was accepted and he was given responsibility for managing the initiative and reporting back to the Environmental Steering Group.

Actual savings vary depending on the meal produced at the sites, as ruminant meal is typically conditioned at around 60°C whereas the temperatures for pig and poultry meal will vary between 80°C and 90°C.

”The financial and environmental costs have certainly encouraged the committee to continue surveying the 552 traps at six-month intervals,” said Reith.

”From a bio-security viewpoint, steam is an effective way to produce pellets and for BOCM Pauls it is now proving to be an efficient way to reduce energy consumption, which is very good news,” added Mike Povey, general manager of TLV.